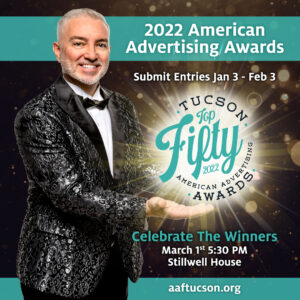 Entries are now open and all entries must be received by 11:59 p.m. on February 3, 2022, through online entries at https://aaftucson.org/aaf-addy-awards/. Entry fees are $75 Single and $100 Campaign per entry for members of the AAFTucson. Nonmember pricing is $100 per single entry and $125 per campaign entry. Student entries are $50 for each entry. This year’s judging will be conducted online between February 4th and February 15th. Judges are industry professionals in like-sized markets from across the country and will evaluate the entries remotely via an online gallery. Only new creative work created in the Tucson market and published or aired between January 1 and December 31 of 2021 is eligible for consideration in the professional competition. Coursework created by college students is eligible for the student competition.