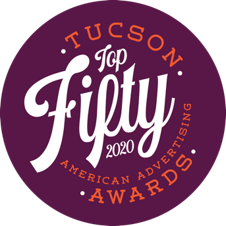 The professional Best of Show award in was presented to Sonder Agency for their integrated campaign for INDE Motorsports Ranch.

All winners of the local competition are eligible to compete in the second level of a three-tiered ADDY Awards competition, the AAF District 12 ADDY Awards which will be hosted in Albuquerque NM the weekend of April 3rd. AAF District 12 is comprised of AAF and Ad2 chapters in Arizona, Utah, Wyoming, Colorado, New Mexico and El Paso, Texas. District winners will be eligible for the ultimate competition, the AAF American Advertising Awards. National awards will be presented June 7th in Palm Springs during Admerica 2020, the American Advertising Federation’s National Conference.